You Are A Creator! 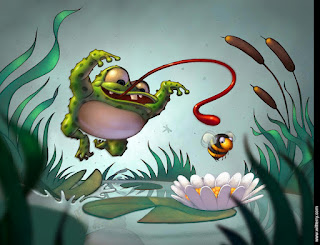 Not THE Creator :) When I first left school in 1992 I was eager to get illustration assignments. After a few months and a few freelance gigs I couldn't believe I could fianlly call myself an illustrator! For the following eighteen years I continued to proudly identify myself as an illustrator. But in the last few years I've begun to realize that this title or label has actually been somewhat limiting in my growth as an artist. The confines of the title kept me from seeing myself as anything but an illustrator- not that there's anything wrong with being an illustrator but can I allow myself to be even more? - I thought.

As I started dreaming up new projects and venturing down new roads with my video tutorials, ebooks, and apps I've realized that I've given myself permission to wear many new hats. Entrepreneur, director, teacher, writer, collaborator, graphic designer, voice actor, animator, editor, and yes illustrator are some of the roles I find myself engaged in now. I'm not yet proficient in many of these roles yet but it's challenging and exciting to be able to wake up and declare, "I'm going to do _________ today!"

Re-defining yourself as a creator allows your mind to wander and imagine yourself being successful in areas you might never thought of. Imagining your successes is really the first step to realizing those successes because if you can't imagine it you won't have the motivation to act. Giving yourself permission to become more- is liberating. Calling yourself a creator allows you the freedom to explore and communicate with like minded people about the possibilities you imagine. I have 3 more projects I would like to pursue in the future if I can finish some of my existing work - and they aren't like anything I've done thus far.

A word of caution: Before you really start to pursue too many projects or skill sets let me make it clear that I believe it is very important to master one craft first. Mastering a craft will mean different things to different people. If you reach a high level of mastery at whatever it is that you do i.e. illustration, writing, animation, coding, etc. you will put yourself in a leveraging position. You'll be able to gain respect from the people you approach if you ever want to partner with them, go into business with them, collaborate with, or hire them. You'll need this respect if you wish to attract equally talented people who offer expertise where you are weak.

So allow yourself a broader definition of who you are so you can become more than you ever imagined. With amazing digital technologies and the internet -which is becoming more and more accessible to the little man the opportunities are endless.

My youngest son told me that frogs don't jump to catch insects when he saw the piece I was working on above. My response, "would you have commented on this piece if I had drawn it accurately?" He thought about it and then said, "probably not." If we expect to get attention in the noisy era of the internet we have to create original projects!
Posted by Will Terry at 12:47 AM