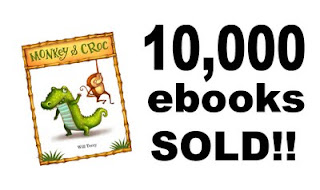 But I think this brings up a question that I haven't tackled yet: Is selling 99¢ ebooks hurting the ebook and traditional book markets? If the average picturebook sells from $12 - $15 and the average children's ebook is somewhere between $3-$7 how can 99¢ ebooks be good for anyone?

I think the best answer is that I don't really know. I'm sure I have some haters out there who are disgusted that I was able to bypass the "right way" to take a book to market via a traditional publisher....and I'm sure those same people are probably thinking that the 99¢ price tag is going to further erode our industry. In many ways I have to agree with them. First I would never claim that Monkey & Croc is better for having skipped the editorial process. In fact I'm sure it could have been refined more and given a more interesting sub plot or something to make it more memorable to children - I'm a novice writer at best. And Mathematically selling books for a fraction of the price would have to influence over all book prices to drop over time.

So why do it? Why hurt the very industry I've been a part of for 15 years? I guess my best answer is that I believe that prices are going to fall anyway. That if I don't offer my books for a low price others will cut me out of potential sales. That selling a higher volume will allow me to take advantage of B&N's search algorithms. That if I sell high volume I might be able to see more opportunities in the future due to my books popularity. In the end I believe that like songs and movies - ebooks will eventually end up at the 99¢ price point. An argument can be made that it costs Hollywood millions of dollars and man hours to produce a 2 hour movie that can entertain you for only 99¢ so why do we think that an ebook should be worth more?...and how long can a children's ebook entertain your kids and how much did it cost to produce?

I learned a valuable lesson early in my career as an illustrator. Without getting into too many details illustrators began participating in re-selling their work in stock illustration houses (think stock photography) in the early 90's. About 3 years in illustrators realized that the stock houses were undercutting their prices - so they were effectively cutting themselves out of commission work with their own paintings in the stock houses. A grass roots effort was made to pull their work out of those stock houses in an attempt to keep prices higher for commission work. I was one of the ones who pulled my work and refused to do future business with the stock houses. The ideal was sound and the leaders of the movement were well intentioned and extremely hard working but in the end we lost to the overwhelming support the stock houses received from the masses of illustrators willing to accept their terms.

I had a close friend who was receiving well over $100,000/year just from his stock house checks. His argument at the time was: "While I realize that in the end my participation is causing an erosion in overall illustration prices it doesn't make a lot of sense for me to turn off this amazing stream of income." I enjoyed my moral high ground as I said goodbye to my $25k/year stock house money and both of us remained and still are great friends today.

It took me years but in the end I realized that I probably walked away from hundreds of thousands of dollars over the next 10 years while the stock companies grew and the commissioned editorial and advertising markets virtually disappeared.

I think one of the most interesting phenomenons we see all the time in our country is Walmart. Say the word Walmart at a party and see how many frowns you produce but the truth is they are the biggest brick and mortar retailer period. And some of those same scowling Walmart haters usually find themselves sneaking in for this or that - excuse ready if they run into someone they know.

Price matters - to almost everyone - and in this economy ebooks are becoming more and more attractive to people as they worry about their jobs and inflation. You can hope that people will do what you want them to do but in the end they'll do what's good for them.

I would love to hear you guys weigh in - If you totally disagree with me please comment - I certainly don't have all the answers.
Posted by Will Terry at 11:53 AM