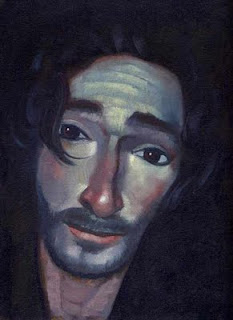 I can't believe it's almost August! This means school is less than a month away for me so I thought I'd get a little practice before I start teaching the Oil/watercolor techniques class at UVU here in Utah. I'm really looking forward to learning right along with my class - the emphasis is on experimentation/ innovation. I like to think of it like we're a bunch of mad scientists in our laboratory (pron: La-bore-a-tree) tinkering, combining, creating...basically making a mess and calling it work.
Posted by Will Terry at 9:45 AM 3 comments:

Interview with an ebook programer

This video is me interviewing my brother in-law, Tom Gilson who has formatted my three ebooks - Monkey & Croc, Tickle Bugs, and Pollywog to Frog. Because I didn't want to gamble with real money I offered him 20% if he would study and program my ebooks. He agreed although he let me know well after the books were making money that he had zero faith that he would ever earn any money on these projects. It doesn't come through on the video because Tom isn't really what you'd call an "animated" personality type but suffice it to say he's been tickled about Tickle Bugs...and of course "Monkey on Crack" as he affectionately puts it and "the frog book". He's made many times over the amount he would have gladly accepted had I been willing to gamble paying him money up front.

I've included a link to my friend Von's FREE ebook tutorial pdf (click here) You have to have Adobe InDesign to use it but from what I hear it's awesome! I personally haven't tried it but knowing Von and his attention to detail I'd bet that you'll have no problem following it and preparing your ebook for upload.

My books are still going strong and selling well - check back in a month or two for some more real sales stats.
Posted by Will Terry at 2:34 PM 10 comments: 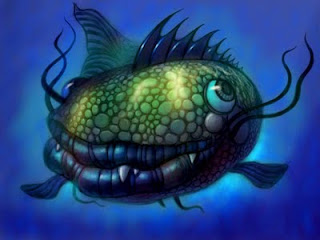 I'm having way too much fun with the "brushes" app on my ipad. I painted this at a doctors office and in the car waiting for my son and a little while watching old netflix "The Office" episodes with the fam. My favorite Michael Scott line: "Would I rather be feared or loved?...I want people to be afraid of how much they love me."

But back to the ipad - while the touch screen leaves many to complain about the lack of pressure sensitivity I find that an easy work around is just lowering the opacity to almost zero and making lots of little strokes. I love the portability and the fact that I can use it with or without a stylus. Like the title of this post suggests - I never used my stylus to paint this image - only my finger. I was surprised that after a while my finger did actually get a little tender but was fine the next day. My goal was to see how far I could take a digital painting using only my finger. I guess you could say I gave my ipad the finger :)...in a good way. With the ability to zoom in and out so quickly - fixing and smoothing line work was a snap.

I do however feel that the perfect tablet for me would be about half as much bigger than the current ipad size. And pressure sensitivity wouldn't hurt either. 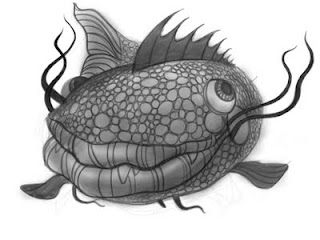 This was the sketch - started and finished on the iPad.
Posted by Will Terry at 11:42 AM 18 comments:

My Books On itunes!

Also, if you have any questions for Tom on itunes publishing and formatting -just ask here and I'll make sure he answers it in the next interview video.
Posted by Will Terry at 9:10 PM 6 comments: