A few weeks ago you may have noticed that on my youtube channel I started interviewing other high profile artists about their work and a specific topic. I love getting to know other artists and as my passion for illustration is ever growing I felt this would be a way to help other artists - and fulfill my social needs. Below are my two latest interviews - might be something worth listening to while you work! I have many more planned out throughout the year so check back. Click here to go to my channel.

Yesterday I started sketching for fun - a little line here- little line there - another character - wouldn't it look better with some value? - hmmm little more value....ok - I'm going to have to color this. So I lost a day (today) but had fun finishing this one! Available as a print here! 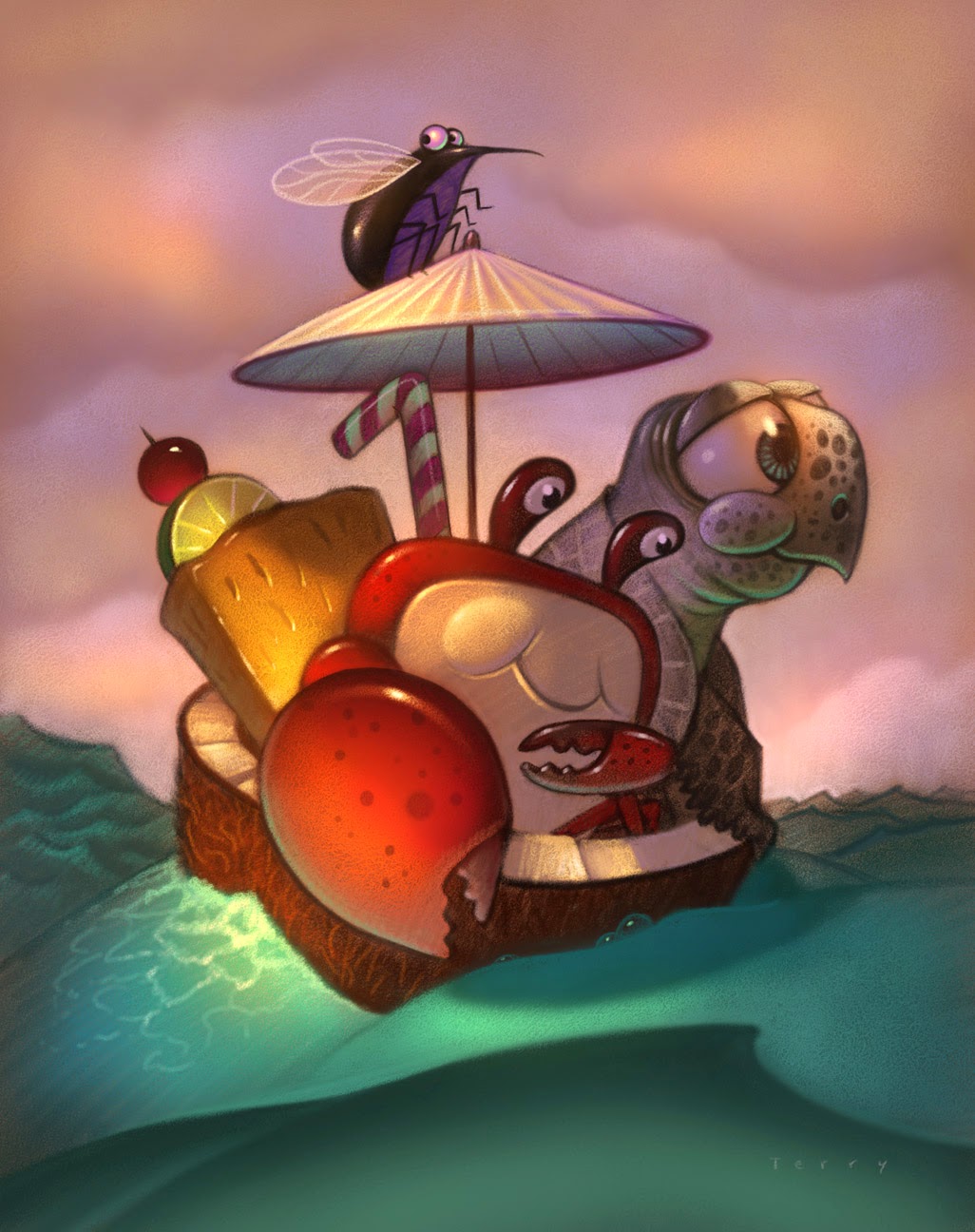 
Jake Parker and I talk about his new BIG idea - World Art Drop Day - learn how you can participate and connect with people who appreciate art.
Posted by Will Terry at 12:11 PM 1 comment:

This One Goes Out To Art Teachers 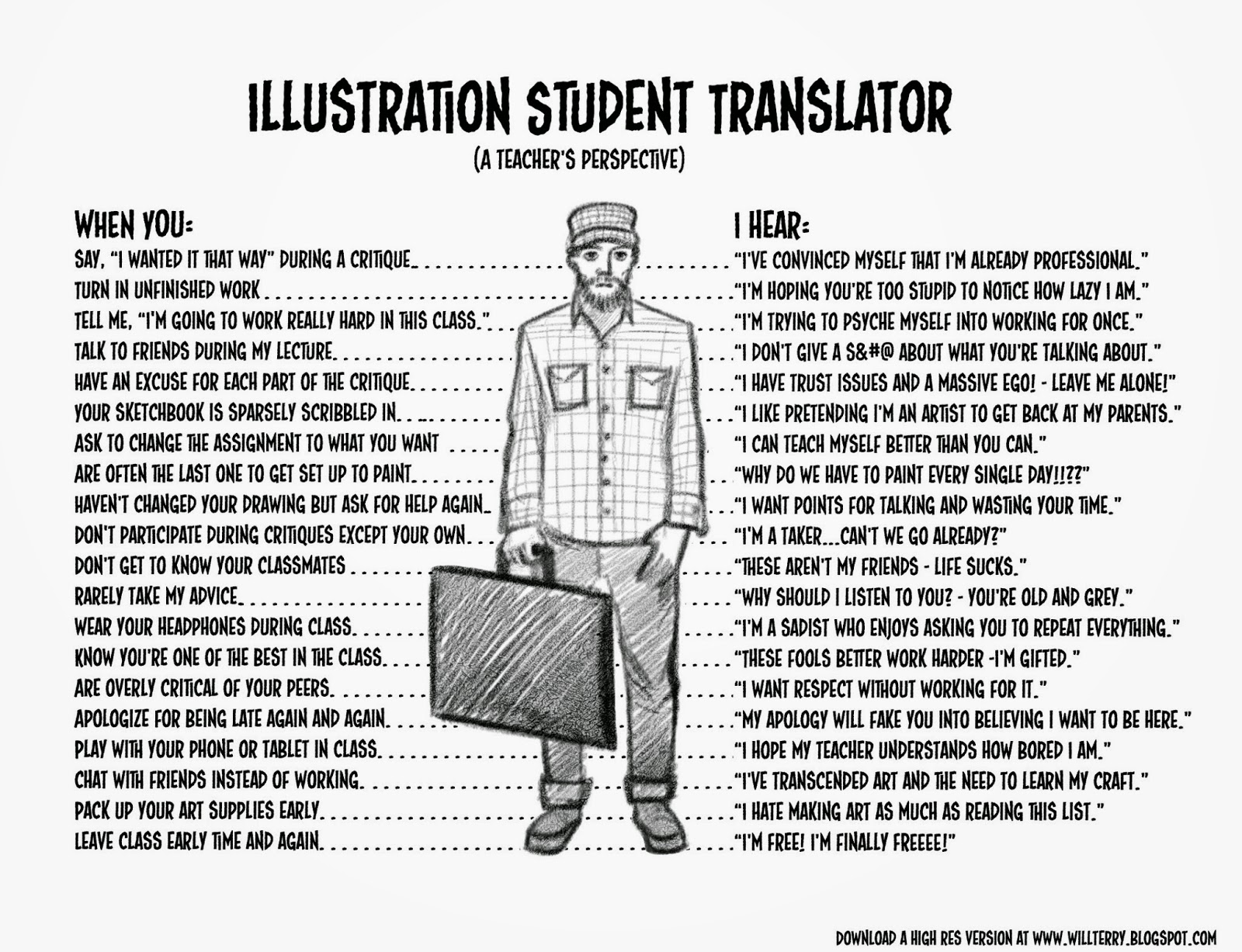 This is a somewhat snarky post about those art/illustration students that exhibit behaviors counterproductive to improving their craft.  I've never had a student that's met all of the above criteria but a few that hit most of them. To set the record straight - I was this guy many times during my schooling in the early 90's. As school at the University is about to start in a few weeks I thought I would draw up this translator for teachers to get a laugh but more importantly to bring awareness to illustration students all over the world. We as teachers may not call you on your self destructive actions but know this: WE'RE THINKING IT!

I often start out my classes telling students what I think - when they do ________. It gets laughs and I see many of them squirm around in their seats realizing I'm not far off. I'm not the kind of guy who is going to call you out in class to embarrass you. I might make a light hearted joke to get my point across but I just don't have it in me to yell at you in class. Please don't mistake my lack of communication for ignorance, apathy, oblivious bliss, or that I'm unaware of what you're doing.

I've been around students long enough to know that when someone tells me how hard they're going to work on the first day of class it sends up a red flag. Too many of you who announce your future art victories have proven to be the laziest non producing students I've ever had. The students who sit quietly in the back are the ones that usually put up impressive work. There is a direct correlation between students who act the most defensive during critiques and the quality of their work. I get it - you're not ready to be taught. You're already feeling like you might not belong in this class so you go into defense mode. It's going to be ok. We'll work together to improve your artwork.

I'm hoping that my little comic up there might bring you to a level of awareness that will help us move forward. Just know that I know what you think I don't know about what you're doing. It's not fooling anyone - it's just delaying your education.

UPDATE - I got so many "why isn't there a positive slant?" comments, emails, messages that I decided to give them what they wanted! Here is the updated version below: 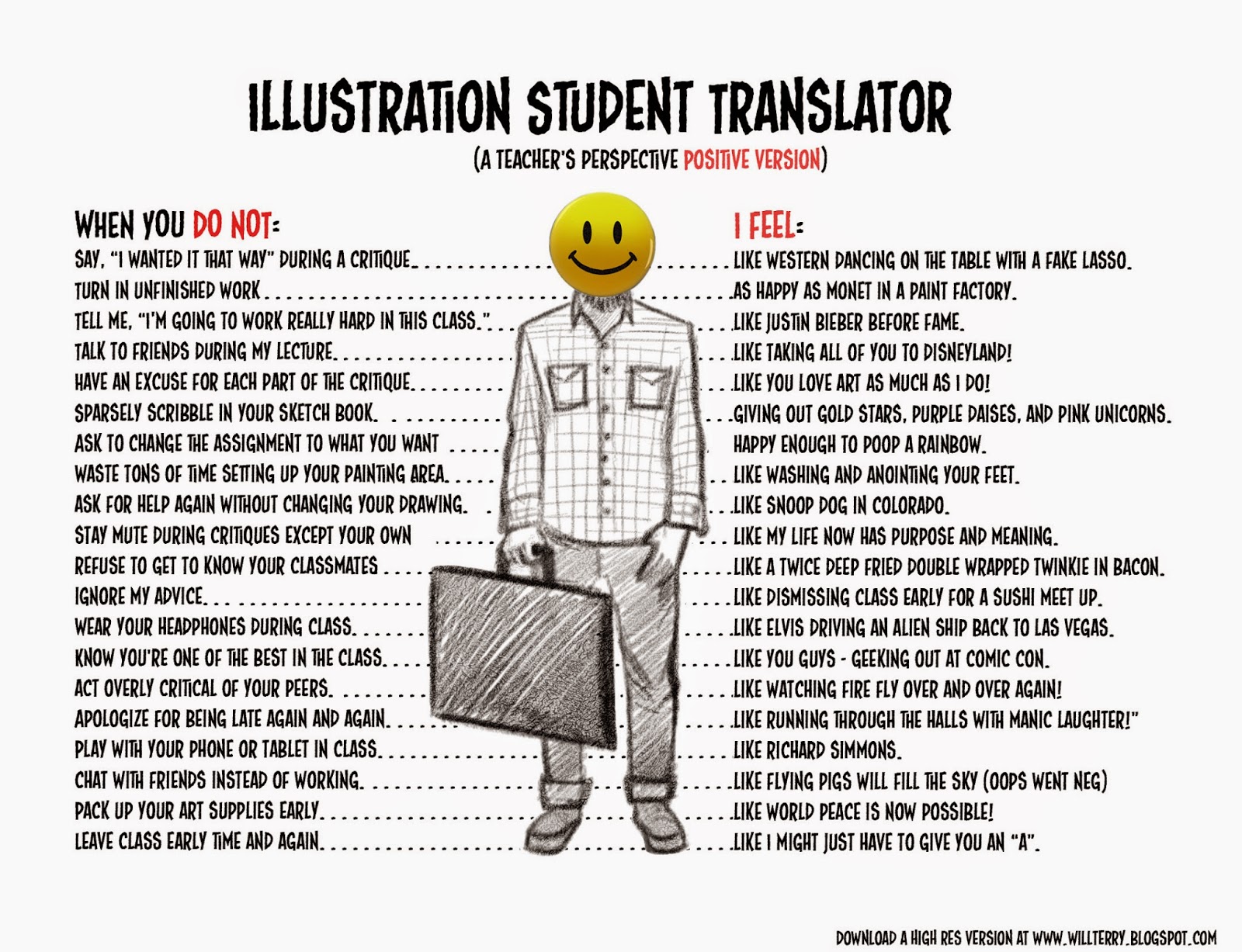