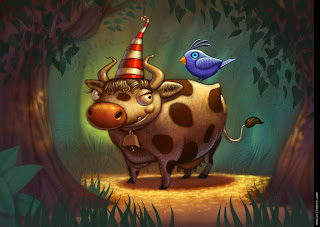 A quick shout out to Terri Murphy and Janet McDonnell who have taken time out of their busy schedules to organize the SCBWI ILLINOIS ILLUSTRATORS’ CONFERENCE this coming Saturday May 5th. They've risked a lot to invite me to speak along side Martha Rago - Harper Collins art director. I've been planning my grand entrance - it's down to a cartwheel (which I've never successfully pulled off) or a belly slide (which could go bad in so many ways). I remember advice way back when from someone - can't remember who: "Don't be forgettable" So I'll do my best to leave some kind of impression...even if it's only a stain on the floor :)

If you're in the area I'd love to meet you! Conference information here.

This image above was done purely for the love of the game - I don't know what it means - I don't know this cow personally - don't even know if she knows there's a bird on her back - can't tell if the bird is friend or foe.
Posted by Will Terry at 11:16 PM 21 comments: 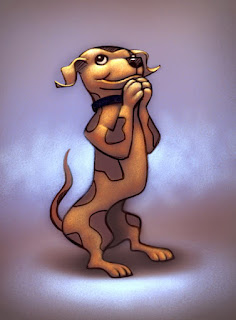 In the past few years the word "Like" has taken on a whole new meaning. Instead of being more of a feeling it's become a way of giving a nod to someone or something on Facebook. And "Like Me" has become a call to action from a friend, relative, or even someone you barely know- an assignment. "You don't really know me but it would help me if you would login to your Facebook account, search for my cause, project, or company, and then click the "like" button." Does this annoy you? because it's often annoying to me...not because it's all that difficult but because I don't want my friends to buy your product if I don't really believe in it or like it.

Don't get me wrong - I click the "Like" button all the time- but it's unsolicited - which means I really cared about your idea, product, or art enough to risk telling my friends. I'm gearing up to launch a new iPad app for kids in the next month or so. Believe me - the thought of asking everyone I can reach for help is tempting but is it the right move?

I get it- the more likes you have the more successful you might become and all of us want success- but we won't be if our products aren't good enough to gain "likes" the natural way...the way "like" used to be...like when you asked your friend if they liked their burger?..."no, it was too cheesy!" I mean c'mon- you don't tell a joke and then ask, "Was that funny?" You simply don't have enough Facebook, Twitter, (insert other social media site here) fans/friends/whatever to get the kind of momentum you need to be successful by soliciting artificial love. So the artificial likes are just that - fake - and if the product isn't that good none of those "likes" will amount to anything.

As an entrepreneur I think asking a virtual stranger to "Like" your product actually weakens your brand. Actions speak louder than words so to me asking someone to give a recommendation with no regard for their true feelings says, "My product is too weak to become successful on its own so I'm going to need you to help me trick other strangers into thinking that people think my product is "the BOMB" when in reality I don't even believe in it myself.

On the other hand I'm a realist. I know that without a few early "Likes" many of your Facebook friends will never get the chance to see what you've been working on. Your worried that your Facebook post will get buried by other posts that are getting "Likes" right? This is where I think it's good to use a few of your close friends and family. These people get you and care enough to go out of their way to give your project a little push. They aren't hoping you'll fail and they'll be there for your next project. More importantly they'll be there to cheer you up if it doesn't do too well.

YouTube is the best example that ideas and products can spread like the bubonic plague. If you post a video that people find amazingly: hilarious, useful, disturbing, informative, emotional, etc. They'll do all the "Liking" for you...so much that you won't be able to control it. So be bold, original, and creative. Believe in yourself and leave the "liking" to the people that actually dig your stuff.
Posted by Will Terry at 2:27 AM 13 comments: 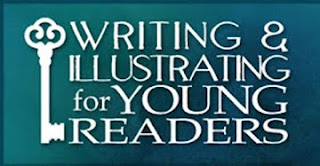 I've had the privlege of teaching in the past for WIFYR back in 2009 and 2010 and let me just say that this is one of the best conferences for writing and illustrating in the country! People fly in from all over to attend and space is still available. In past years the conference has sold out so it's not too late! I've talked with quite a few editors about this conference and many applaud it as one of the best in terms of quality of teaching as well as atmosphere. Their dedication to bringing you relevant and current information is really the key to their success.

There is a direct correlation to those who attend children's book conferences and those who get published. You simply can't do it on your own. You need to immerse yourself in the culture and expose yourself to the methods being taught by professionals. Think of it as a crash course in exactly what you need - not something you're likely to find at your local college. If you can swing it this is well worth your time! Here's the link - click.
Posted by Will Terry at 1:21 PM 3 comments: 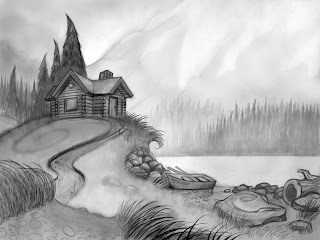 I've been working on this little iPad sketch on and off for the past few weeks. Whenever I'm in a meeting or a doctor's appointment I relax while sketching - amazing at how the time passes when your working on something you like. I've always wanted to own a cabin on a lake - perhaps it will happen for me some day. 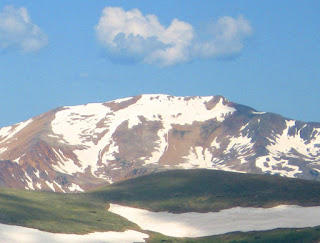 I wasn't happy with the mountain I drew in the background so I replaced it in photoshop with a photo. 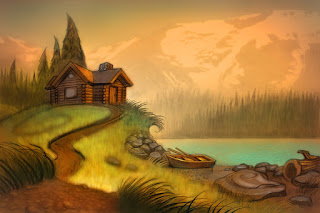 I emailed my sketch to my desktop and added color in Photoshop. I love the work I get to do for clients as well as the little bits of time I'm able to grab for personal work.
Posted by Will Terry at 12:16 AM 18 comments:

Check out my "negative" ebook reviews :)

In the following video I read my negative ebook reviews from the Barnes & Noble website just for kicks and giggles. You can actually learn a lot from your reviews and it really has helped me form my opinions for moving forward. As I work on my future app/ ebook projects I will be trying to avoid the problems that I had on these first three books. Monkey & Croc was my first attempt and gets the most negative reviews - mostly for bad formatting. The second most negative review I get is that my ebooks lack interactivity - another feature I will be adding in my apps. I've decided to work on projects geared for the iPad simply because that device works so well and is very popular. I feel I have the best chance for success by going in this direction. 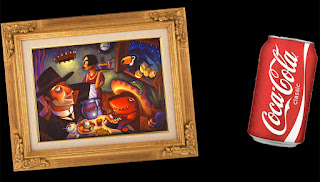 I constantly hear fellow illustrators, photographers, and graphic designers ask each other, “what's the going rate?" – a book cover– magazine spread– picture book- it seems that many artists want to know what you were paid so they can ask for the same amount. I think this is the wrong question. I think making art is very different than making a massed produced product such as a can of coke. A can of coke has a fixed cost and a fixed amount of time to produce. Your art varies in complexity and the time it takes to produce AND - it's very different than mine. Your art might take you longer to produce than mine. The project I'm being asked to illustrate might be more complex than yours. The conceptual energy you spend might be more taxing on you than me. My method might be more expensive to execute than yours and so on.

I think we should be asking different questions: How much time will this assignment take me? Can I complete this project given my current work load? Do I want to do this assignment? Do I believe in the message of this assignment? Will I enjoy working on this project? Am I capable of successfully completing this project? What is the opportunity cost of taking this assignment? How bad do I need money right now? Given all of these factors my motivation for a particular assignment is going to be different than yours. My need to land the project isn't going to be the same as yours. These factors can change from month to month as my workload fluctuates project to project. So a one size fits all price makes as much sense as expecting to buy Apple stock for the same price it was 15 years ago.

My formula for pricing assignments goes like this: 1) Will I have fun illustrating this project? If so I'll probably be willing to accept less but I'll need more money if it's going to be drudgery. 2) Will I have to work extremely long hours to complete the assignment or do I have plenty of time? My demands will vary accordingly. 3) How bad do I need the money right now? If my income has been high than my need to take the assignment is lower and I'll probably ask for more money.

After I consider all of these factors I try to figure out what my bottom line dollar amount is. Example: A client asks me to to illustrate a brochure for a national toy company and wants me to submit my bid. Work has been slow so I really want to take the assignment even though it doesn't look like much fun. I figure that given the work load I want to do it for no less than $2000 – lower than that and I'll be happy to lose it. If I can visualize being happy doing it for $1600 than that has to be my new bottom line and so on. So if $1600 is my bottom line then I can feel comfortable asking for $2500 - $3000. If the client agrees to $2700 I'll feel pretty good knowing I would have done it for less. If the client comes back saying they can't pay a penny more than $1300 I won't stress about turning it down because I've already had this crucial conversation with myself.

On the other hand let's say I'm asked to do the same assignment but I've been very busy with good paying work and I currently have a lot of assignments. Taking this new project will have me working weekends and very long days. Now when I go through my check list my bottom line is much higher. This is why you and I can NOT possibly expect to work for “the going rate”! In this case my bottom line might have increased to $4000 or even higher. I probably won't get the job when I am firm at this higher rate but if I do I'm still happy- if not – no sweat. The most important thing is avoiding regret. There's really nothing worse than landing the project and then wishing you had turned it down. You have to know what your bottom line is before you can expect to negotiate successfully.

Lets stop treating our work like common mass produced products and start treating it like art.
Posted by Will Terry at 12:18 AM 24 comments: