Don't Always Do It The "Right Way" 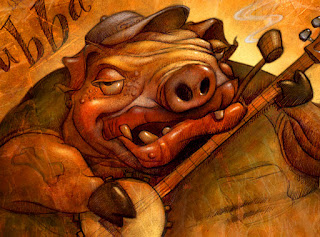 I bring this up because when I'm down at school I constantly hear students telling eachother things like, "you're supposed to do it this way" or "that's not the way that so and so said to do it." I believe in obeying the rules most of the time...wait - that sounded like a rule!...how bout: Obey some of the rules some of the time but not all of the rules all of the time unless you want to but if you want to break all of the rules that might be good too however that probably won't work either so don't listen to me but you should listen to some people if you feel they're giving good information. hmmmmmmm. How bout some examples:

Bill Gates - laughed at by IBM executives for only wanting to license his operating system. In other words he was laughed at for "doing it the wrong way."

John Lasseter - Fired from Disney for wanting to introduce computer animation to Disney productions - Started Pixar - Now chief creative officer at Pixar and Walt Disney Animation Studios. He is also currently the Principal Creative Advisor for Walt Disney Imagineering...pssssst - he did it the wrong way.

Steve Jobs - How many times do you think he was laughed at for all the innovative ideas he implemented. It's easy to think, "why would I laugh at Jobs? - he created so many wonderful products." Before he attained his unimaginable success he was often branded a nut for his strange decisions.

Larry Page and Sergey Brin created a search engine their way - a different way - they broke the rules. They were also late to the search engine party and couldn't get anyone's attention. All the big search engine companies showed them the door when they tried to sell their technology....so they started Google.

So I created this piece: Watercolor, collage, acrylic, digital, and ball point pen.

We are in a creative field and some rules are very important...but learning to break some of them is the difference between leading and following. Can you afford to follow in an industry that's always looking for fresh work?

Assignment: Illustrate a "banjo pig" using watercolor to post on http://banjopigs.blogspot.com/
Posted by Will Terry at 7:58 AM