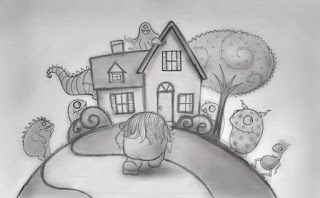 First - here is another sketch for my monster app - The monsters are coming! This is going to be a really good test in marketing when I'm finished. Not only will I have it programed for Ipad/iphone but also Kindle Fire so I'll have a good comparison on these two retail giants. I don't ever know whether to call it an app or an ebook - if I call it an app people think it's a game - ebook and they might not look for it in the app store. Confusing.

Ok, what's up with all the frustration and pain talk? Over the years I've gotten to know quite a few artists and I've realized that most of us share something that I don't think the 9 to 5'ers have. We often bleed for our art. I'm not saying that people that work a shift don't care about their jobs and aren't dedicated but I do think that in general, artists have to invest much more emotionally.

There's nothing like the euphoria of working on a piece that's really working - at times it's almost like it's painting itself and you're just there as an observer. But, when it's not working out the agony is often hard to bare. I used to burn paintings every now and then and while it relives a little stress it still haunts you until you right the wrong you created. When a painting is going south the lies begin, "it's not that bad"..."it's good"..."it will start looking good after I finish the figure"...We want it so bad that we're willing to overlook obvious major problems - kind of like I do with my kids. :)

I've had students crying in my classes before because their paintings were heading straight to hell. I tell them that their tears are a great sign. Tears over paintings mean that you have the aesthetics and sensibilities to know that you aren't achieving the vision you have in your mind. That you know you are much more than your creation. That your expression is being stifled by the skills you have yet to attain. There's nothing sweeter than scratching, clawing, and bleeding for your art when it reaches your vision. If it were easy it would be common and worthless.
Posted by Will Terry at 8:57 AM