Good Reviews for "Skeleton For Dinner!" 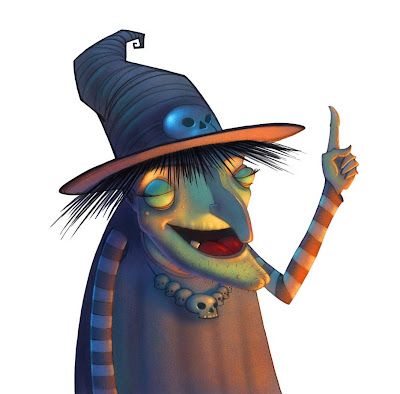 Just got a few good reviews from Kirkus and Publisher's Weekly!...it's always tense waiting to see if they'll like it or trash it. This book is due to hit the stores in September - can't wait!

Kirkus:
Mother and daughter witch want to have skeleton for dinner. Is he on the menu or intended to be a guest?

Big Witch and Little Witch are proud of their yummy stew full of delightfully disgusting ingredients, such as “shark fins and snake skins, spider silk and centaur’s milk, catfish whiskers and banshee blisters.” Little Witch makes a list of the friends she wants to invite for dinner. She writes “Dinner” at the top, with Ghost, Ghoul and Skeleton below it and tacks it to a tree. When Skeleton reads it, he flies into a panic. Veteran Cuyler keeps the text flowing and sets a just-right pace for reading aloud. Poor Skeleton “rat-a-bat-tat[s] down the hill… / and jingle-jangle[s]” off to warn first Ghost and then Ghoul about what he fears the witches are planning. Terry chooses deep blue-greens and dark craggy trees to create the nightscape. Skeleton’s cool white and Ghost’s translucent wash of white makes them glow on the page, whereas the warmer tones used for Ghoul and the bright green of Little Witch provide refreshing contrast. When Little Witch fails to find her friends to tell them about the dinner party, her despair sends Crow flying to the rescue.

A poison-ivy bouquet, full bowls of stew and happy friends bring the story to a satisfying close. Make sure to tuck in to this delicious tale. (Picture book. 3-6)

Publisher's Weekly:
Bathed in a spooky graveyard glow, Big Witch and Little Witch brew a stew and prepare a list of the guests to invite for dinner. What follows is a kind of Halloween version of Chicken Little, as timid Skeleton misunderstands, believing he’s an ingredient, not a guest. He dashes off to warn two friends—Ghost, a wispy girl, and Ghoul, who resembles Quasimodo. It’s a familiar joke, but Terry’s illustrations give the cast of characters distinctive looks and personalities (they almost resemble rubbery toys). Despite the threat of death by cauldron, neither contributor lets things get too frightening as the story works its way to a happy ending for all. Ages 3–5. Author’s agent: Tracey Adams, Adams Literary. (Oct.)
Reviewed on 07/19/2013 | Details & Permalink <http://www.publishersweekly.com/978-0-8075-7398-3>
Posted by Will Terry at 12:09 AM