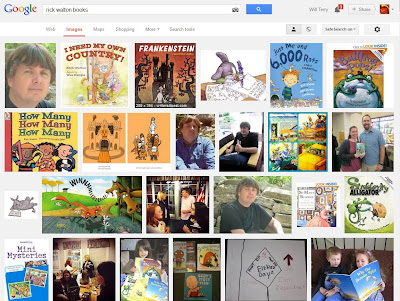 I'm going to be blogging about the progress on my new story app "Gary's Place" from now until it's for sale in the app stores - and beyond - even updates on my sales figures. This is really scary because I'm promising to do something that I haven't done yet. In fact there's a voice yelling inside right now begging me to delete this and stop writing. But - here we go...

Step 1 - Start with a GREAT story!

I came up with an idea for a story about a gopher who isn't content with his home. It had a good beginning, middle, and end but I couldn't write a good manuscript because I don't have enough writing experience.  So - I approached Rick Walton, a well known children's book author and friend (over 90 published books - google screen shot above) and asked him to read my story and write it if he liked the idea. In a ridiculously short time he turned it into gold. Yes I will cut him in for a large percentage and yes it took him no time but I believe it will be worth every penny. He's been writing for over 25 years and his experience shows.

The story is THE most important part of a story app. Illustrations, music, character voices, animation, games, coloring activities, things that wiggle and jiggle won't make it a great app!

Often we don't hold ourselves to the same quality standards we expect from the goods and services we consume. We want to see movies with a great story and cinematography asking friends and family for recommendations before dropping money at the box office. But do we provide the same when writing for a book, app, or ebook? If you don't have the writing skills are you working hard to develop them? Have you considered partnering with a professional author?

I get emails, messages, and phone calls every week from authors looking for illustrators to partner with. Professional authors often have a huge back list of manuscripts that have never been published - usually much larger than their printed books. I guess a good question is will having a great story sell enough apps to offset the percentage or payment you'll have to give up to an author? I think so. I believe that a smaller percentage of a GREAT project is worth much more than a larger percentage of a Mediocre project.

Did you know there are thousands of movies produced each year? How many can you name from 2013? My point is that if you aren't producing the best who will care?

But Will, you're a professional illustrator so it's easy for you to work with professional authors. Sure - it's probably easier for me to strike up a conversation but from the sheer numbers of authors I've been approached by I know there's a huge need out there and it's only going to grow. If you're passionate and committed I doubt you will have trouble talking an author into letting you take a crack at bringing one of their stories to life.

So check back to see Step 2 as I share my progress reports!

And as a reminder - if you're worried about the programming side of making a story app we are having a class that starts in about a month to learn Kwik - the DIY photoshop plugin software that lets you create your own story app. More info.