The Illusion of Security 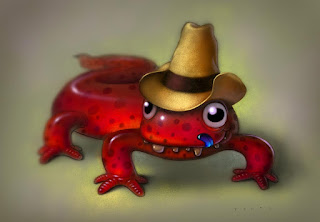 In 1992 I was at a crossroads. Try to find a full time job illustrating /graphic designer or take the road of uncertainty and dive into a freelance illustration career. I gambled. To this day I don't really know how I did it. I was married with one kid and they were depending on me to earn a living. My wife had to have been scared but was supportive. My parents I'm sure thought I was nuts - but were also encouraging. My friends said little. I think everyone expected it to last a little while but that eventually I would have to suck it up and get a real job.

Why do we make decisions that go against our passions? Why did I feel like I was taking the risky road? Why do people think that doing what they're naturally good at is a risk? Maybe taking the road well traveled is the risky road...I would submit that we're often motivated by FEAR.

We all crave security. We think we want to know what will happen tomorrow. We hate not knowing where we're going.  We imagine horrible things that rarely come true. We want to know what we're going to be. What we're going to do. How and where we'll live. How we'll pay for things. etc. These aren't bad things to want but they do feed our often irrational fears. Personally I don't know anyone who is homeless. I know people who have had to live with relatives - I lived with both my parents and in-laws in the early part of my marriage. My point is that no matter how bad it gets it's still not as bad as what we imagine.

There is no such thing as security.

I have a lot LESS fear than ever before. I don't chase security. I try to make decisions based on my ability to achieve the goal - not because it's what others think I should do or what I think will make the most money. This has lead to some AWESOME FAILURES! Like my Kickstarter a few months ago. I won't pretend that that one didn't sting. I felt like I got the Sh#% kicked out of me by kickstarter - but it was totally worth it because it armed me.

While those who did it the "right" way might worry about getting a pink slip I find it ironic that by doing it the "wrong" way I have a little less stress about that part of my life. My income comes from many places now and if one falls off - big deal. I earn income from:

Some of these don't pay very much but it all adds up. Earning income from many different places was never written down as a goal or plotted out -it just sort of happened from working each day on that which I love - creating art. The piece above was one of those pieces that painted itself. I was watching the clock while working on it - wondering how hours were melting away as I tried to finish it before I had to run off to class.