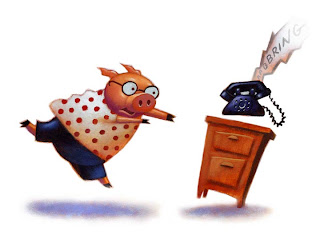 If you could ride a horse really fast back in 1860 you might have been able to land a job delivering mail for the Pony Express. You might have even delivered one of your own letters to let your parents know you landed a good job - although not without danger. But in less than two years (in 1861) you would have had to let them know that you were unemployed again - replaced by the telegraph which had been gaining momentum and could do what you did in a fraction of the time.

If you manufactured telegraph equipment or sent telegraphs you too were out of a job about 30 years later - replaced by the telephone. Now many people are finding it possible to live without the land line opting for it's cousin - the cell phone. My father worked for AT&T for 30 plus years and saw a lot of technology changes - he even installed some of the first cell equipment for the Montgomery County police in Maryland and pondered, "This technology is too expensive...no way will it ever be used mainstream." He didn't realize that phone companies would give the expensive cell phones away in exchange for a monthly contract!

So let's examine publishing. Someone long ago figured out that you could flatten clay into tablets and write on them but they broke easily. The Egyptians created the process of pounding out reeds to make papyrus to write on while the Chinese found a similar product - bamboo -and it was about 100 AD that the Chinese invented paper. So for about 900 years we've been using paper to send, store, and share ideas. That's a pretty big tradition.

I get asked all the time if I think ebooks are a fad? If I think it's worth it to produce them? If I think making apps are better? How I found my programmers? Is it better to try to find an agent and get my book published traditionally? How I plan on marketing my apps? What should I do?

I'm flattered that so many would think I have the answers but the truth is that I'm just a dumb guy who fumbled his way into this industry and is now trying to figure out what my next moves will be.

But for what it's worth - here are my thoughts:

1) I've never seen a new technology evolve into the market with as much popularity as eReaders - and then die off. We have some great forerunners to the publishing industry that give indications that ebooks are here to stay. Music is now digital. Movies are now digital. Photography is digital. Periodicals - digital. You can paint digitally and yes books are also offered digitally. You're even reading my blog digitally - a new method of sharing ideas less than a decade old. So where does that leave paper? I think it will eventually be replaced. Sure there will be some who won't want to give up their paper - I see them as part of a significant group like those who still listen to vinyl records. Are they wrong to like paper - of course not - but will paper be the dominant delivery method of books? I don't think so. Will the children of eBook reading parents have a romantic connection to pulp?

2) If paper goes away what happens to publishers? I think some publishers will thrive in a digital world and I think some won't figure out how to stay relevant. I see a lot of authors and illustrators stuck in old ways of thinking and some keeping an open mind as to how they can take advantage of the coming changes. There are pros and cons of working with traditional publishers and the same is true for indie publishing. Neither one is superior to the other - just different. Is it hard to get an agent and sell your book to a publisher? Yes - and it can take years of trying. Is it hard to publish on your own? No - the hard part is getting the attention of your audience. Becoming a successful author/illustrator will be just as hard if not harder in the future.

3) How can I attract the attention of my audience?  I've read a lot of articles online about marketing eBooks and apps. I've seen a lot of people trying to game the system with fake reviews from relatives and begging "likes" on Facebook. I've heard of people paying for reviews and making up fake awards for their books. Many give their eProducts away for free in hopes of climbing to a higher sales rank on retail sites. I've said it before and I'll say it again: There is no substitution for greatness!

Your product must be AMAZING, EXTRAORDINARY, SUPERB, INCREDIBLE, and UNBELIEVABLE! It has to be extremely beautiful or disturbing or funny or touching or informative or witty etc. I looked on my iPad today and noticed that of the indie apps that I've purchased I found them from friends, review sites, and social networks. None of them came from ads. None of them came from promotional campaigns. None from being asked to click "like". None from FREE!!! None from hype. What they all had in common was an individual sticking their neck on the line and saying, "try this - I like this - you'll probably like it too." And so the "good stuff" will get passed around and generate a viral quality simply because it's good and nothing else.

People say that I'm naive. Perhaps. But I know how and why I buy eBooks and apps. I also know many success stories where the product was so cool that people had to have it - couldn't live without it. When you buy a song on Amazon or iTunes did you buy it because you saw an ad? or did you download it because it was stuck in your head? - in other words it was awesome right?

Am I afraid of making mediocre ebooks/story apps? You better believe it!-YES - it keeps me awake at night. But fear is a good thing - if you're not afraid you probably don't understand how vital it is to create something truly original.

There's no substitute for being awesome! The internet has leveled the playing field making mediocrity hard to sell and celebrating greatness. Be Great! And don't listen to the nay sayers who will tell you that the little guy doesn't stand a chance next to the giants entering the ebook/app craze. There will be many who will write or speak negatively about indie publishing simply because they haven't found success - I would submit in most cases they didn't produce a product that people had to have - so now they're eager to dash the dreams of others - it's just sour grapes.
Posted by Will Terry at 8:03 AM